In 1924, after van Doesburg and Mondrian argued over a diagonal line, Mondrian (believing the horizontal and the vertical line, straight up, down and flat, to be far more vital than van Doesburg’s visually idealistic diagonal line) broke with De Stijl.  Then by means of retaliation, he created his ‘double-line’ painting ‘Composition with Double Line and Yellow, 1932’.

Academically thought-provoking, Tate’s superbly installed Van Doesburg & The International Avant Garde: Constructing A New World confirms what a lot of people don’t know; van Doesburg is to Mondrian what Picasso is to Braque.

Impressively rich in art historical detail with 350 works and documents, the exhibition’s organisation is roughly chronological.  From van Doesburg’s very early, subtle, organic embryonic ‘Girl with Buttercups’, 1914, with no hard edges, to the rigorously strict geometric stained-glass design of the beautiful ‘Composition IV’, 1917, (offering two different interpretations from either seated woman to Bach’s music), to the influence of Kandinsky’s expressionism, philosophy and Cubism.  Obsessing about a mathematical approach to composition in Mondrian’s late ‘fourth dimension’ van Doesburg wanted to make an all-encompassing universal art, applying the fourth dimension to architecture too.

By way of explanation, in a house plan, van Doesburg combined his three-dimensional coloured planes with the idea of a hypercube.  The original concrete notion of it, as, van Doesburg rationalizes, as, “The new architecture is anticube; its different spaces not contained within a closed cube. The different spaces develop unconventionally, from the centre to the periphery of the cube, so that the dimensions of height, width, depth, and time receive a new plastic expression, giving the impression of floating, suspended in air, in opposition to the natural force of gravity… The new architecture takes account not only of space but also of time as an architectural value. The unity of space and time gives architectural vision a more complete aspect.”  Allowing this collaboration and partnership of art and architecture caused great conflicts and tensions as it consented to the break-up of facades of the buildings in plans schematic about movement and passage.  By representing the fourth dimension – as a conceptual reality of an abstract non-objective expression – van Doesburg gets rid of that which already exists as being considered as conservatively behind the times, for a more modern, rhythmic and dynamically spatial effect of the future. 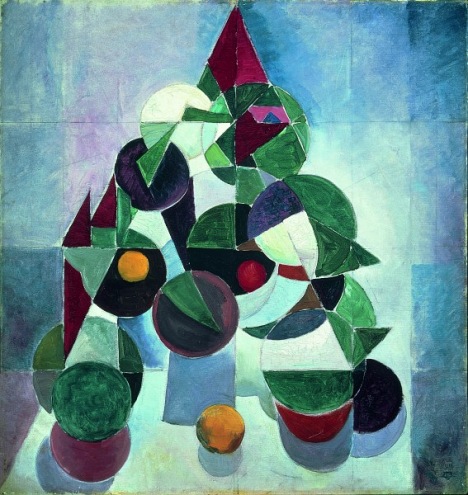 And that’s what interested van Doesburg.  The future.  From typography to furniture.  Relentlessly continuing using the fourth dimension, long after Mondrian abandoned it, as a way of naturally continuing his work; the combination of coloured planes in three dimensional compositions.  The abstract notion of the fourth-dimension of negative space – as represented by shades of grey in relation to positive space shown in primary colours – that eliminated perspective, whilst maintaining the appearance of a three dimensional space and indirectly representing the fourth dimension, in a sense, colour was the fourth dimension, influencing Constructivism and Dadaism, designers, poets, musicians and architects such as Rietveld and Oud.

Mondrian’s appreciation for mathematics led him to his unique style of representing the fourth dimension, “by both their dimensions (line) and values (colour), arithmetic compositions can express space without the use of visual perspective.”  His experiments with the fourth dimension were interpreted through Einstein’s theory of relativity.  The complexity of van Doesburg’s art embraced Einstein’s relativity theory too, in that the fourth dimension sought to make an art form that was more ideal and more perfected than previous works.  However, Einstein rejects the opinion that the  artistic language has anything in common with his discipline, stating, “In science the principle of order which creates units is achieved through logical connection while, in art it is anchored in the unconscious.”

Then by eliminating gravity, no longer was one direction defined as ‘down’ and opposed by ‘up’, nor did the words ‘left’ or ‘right’ have meaning. All directions were equal, and only their relative orientation to each other mattered.  The machine-made look of stencil and stamp employed so you couldn’t see the ‘hand’ of the artist.  Quitting complicated forms to just use squares.  Big to small, to give a rhythm of beauty, equilibrium and stativity, about ideas of time, as in ‘Arithmetic Composition’, 1929/30.  Quite exceptional.

In 1931 van Doesburg founded another group, Abstraction-Création, which attracted the troubled American painter Arshile Gorky, who later went on to shake up the New York art scene.  After World War II, American art articulated the post-war American spirit for their go-get-ahead overconfidence, that is typically the American brag and the envy of the art world, as non-figurative modern art – Abstract Expressionism – was born.